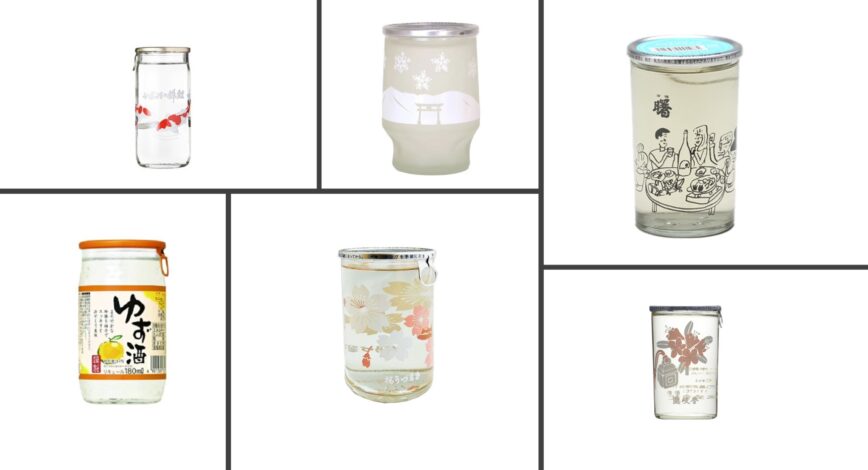 Cup-Sake was developed to reach a wide number of population with its convenient format. The style of Cup-Sake is familiar these days, however, the current format has been reached by numerous efforts for improvements. We could say Cup-Sake successfully enhance the image of Sake with its handy format and attractive designs,.

Cup-Sake: its history and attractiveness

Cup-Sake is Sake sealed in a small glass of 180ml, with a lid made of aluminum, which is equivalent to ‘1-go(合)’ in a Japanese traditional measurement.

In 1964, the pioneer of Cup-Sake, Ozeki Ltd., launched the first Cup-Sake named “One-Cup-Ozeki”. Back then, the major way of distributing Sake was to use large bottles of 1.8l. Research developer himself found it unsatisfactory that he cannot see the labels of Sake if it was served in Tokkuri at restaurants and bars. He came up with an idea of serving Sake in a ready-to-drink cup, so each customer has a chance to check the labels before consuming it.

One of the advantages of Cup-Sake is that people can compare the different Sake since each cup carries a small quantity easy to be finished in one-time drinking occasion. Cup- Sake can also be recommended to people who would like to find their preferences in tastes through comparisons. If you would like to make a debut to the world of Sake, why don’t you start with Cup-Sake to experience many types of Sake little by little.

As mentioned earlier, Cup-Sake initially gained popularity from its handy format. Lately, not only its practical format but designs of the packaging also attract consumers. There are some Cup-Sake sold at tourists sites for souvenirs with local characters, otherwise the cup carry images of cute animals and flowers to stay attractive to the young generations and female targets. When the cups have nice designs, people prefer to re-use them as vase or pen stand, otherwise just enjoy collecting them. Even after finishing the inside content, the product continues to give values to customers in the form of useful cups.

As explained above, normal Cup-Sake is sold in a glass of 180ml. When Cup-Sake became a large hit, the idea of substituting glass cup with a high-quality Arita china was proposed by a collaboration of studio of china, Bunpachi Kobo, and Koimari Sake Brewery in Saga prefecture. In the following year, in 2006, 250 sample products went on sale to be sold out on the same date. Assuring the product’s popularity, It went to an official sale in the following year, thereafter, it has been popular as souvenirs and other types of gifts. The Arita china, one of the most traditional and prestigious china in Japan is used for the product, so it truly carries two values : Sake itself and the container of Arita china which can later be used as vase or cup. The focus of product is unique and draw attention.

Hire-Sake is Sake arranged with fins of sea bream and puffer fish.

Here are some tips to make tasty Hire-Sake. First of all, the temperature is important. Hot Sake, Atsukan, is usually served at 50-55℃. For Hire-Sake, even a higher temperature, approximately 75～80℃ is recommended to extract the umami composition of Hire for an enhanced roastery flavour. The second tip is to steam fins in a cup with a lid. When the fin is roasted and placed into warm Sake to be steamed in a lidded cup, umami and odors come out at most. This is one of the recommended ways to enjoy Hire-Sake.

There are cups specially made for Hire-Sake that have 2 layers to reduce the contact of air inside and outside of the cup so people can easily hold when the content is hot, otherwise that have accompanying lids. Hire-Sake cups have both visible and invisible secrets to approach customers. There are attractive images and designs visibly tell the consumers of the content. Invisible secrets can be found in the packaging. The pioneer of Cup-Sake, Ozeki Ltd. researched and developed to create cups with a thinner glass. Re-designing of the glass is environmentally friendly since not only less material is used for the production of glass container, but it also lightens the weight and reduces the energy necessary for the transportation of the product. Cup-Sake has been continuously improved to follow the trends and needs of the customers, which is why it has been popular in the market for a long period.

If you find Cup-Sake at stores, have a careful look at it and imagine the efforts embedded in the product besides the taste itself!