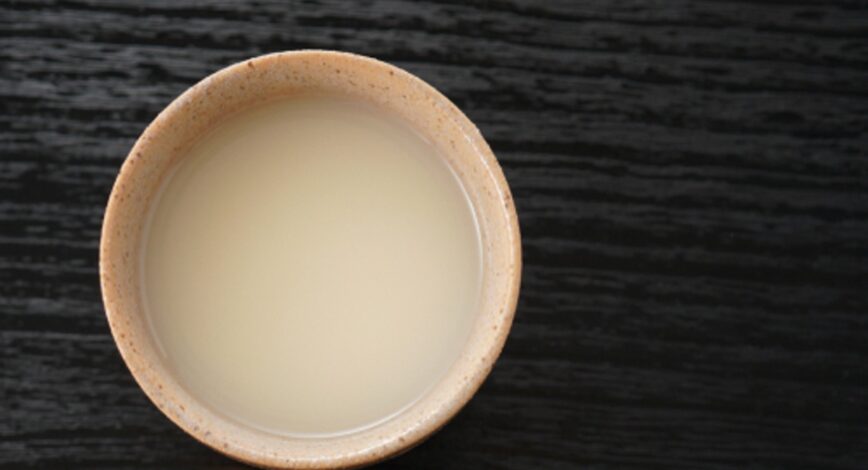 Nigori-zake – crowdy alcohol made of rice

Most Sake is found in a form of clear transparent liquid even with slight colours of golden, yellowish, or greenish look. If you have not seen Nigori-zake meaning cloudy Sake, you may deny it is fallen into the Sake category.

This article will focus on Nigori-zake. There exist core Sake fans who like Nigori-zake. Its unique taste is even loved by non-connoisseurs of Sake for its softness. Let us compare it with normal Sake!

Why is it cloudy?

Sake we most commonly find is usually transparent, then why is Nigori-zake cloudy? The trick can be solved in the process of Sake production.

Sake in a form of clear transparent liquid, is produced in the following method : Rice is fermented and turns mushy. Then, the mushy ingredients is placed into a textile bag to be squeezed to separate the liquid from sediments. The filtered liquid is Sake.

To obtain Nigori-zake, breweries use bags with rough textile with large holes. Logically, cloudiness of Sake is determined by the intensity of the filter textile. As a consequence, Nigori-zake ranges from a little cloudy to mushy with chunky sediments as each brewery uses different filters to produce unique textures of Sake.

Moreover, there are some variety of Nigori-zake depending on whether it is pasterised or not. Nigori-zake bottled without Hi-ire, pasteurisation, have fuzzy characteristic with live kobo, and pasterised Nigori-zaketurns milder by pausing the in-bottle reactions.

One of the features of Nigori-zake is that it delivers the genuine flavour of rice.

Compared to transparent Sake, Nigori-zake provides a more powerful and thicker attack. Its texture is rather creamy and may be similar to yogurt.

Flavours differ depending on each brewery’s production method. The category of Nigori-zake embraces a wide variety, which is also a prominent character of Nigori-zake.

What is the difference between Nigori-zake and Doburoku

Among the genres of Sake, there is also a cloudy Sake called Doburoku. From its look, people easily get confused identifying Doburoku and Nigori-zake.

Nigori-zake develops itself over time as it contains more Moromi compared to normal Sake. Lights and time can influence its quality and can change the colour as well as flavour. Most breweries bottle Nigori-sake at the best timing to deliver the best quality.

The best temperature to drink Nigori-zake is room temperature, around 20 degrees Celsius. If you find the contents of Sake is separated, with sediment part and clear part, gently shake the bottle to mix the contents. Mixed with sediment, Sake turns creamy in both texture and its flavour.

It is also recommended that you wait for a little while after Sake is pourd into a glass, to allow its separation to make the clear layer on the top and sediment part in the bottom. The upper layer gives a refreshing touch, then you get to enjoy the contrasting texture of the sediment towards the bottom.

Find your own way to enjoy the Nigori-zake