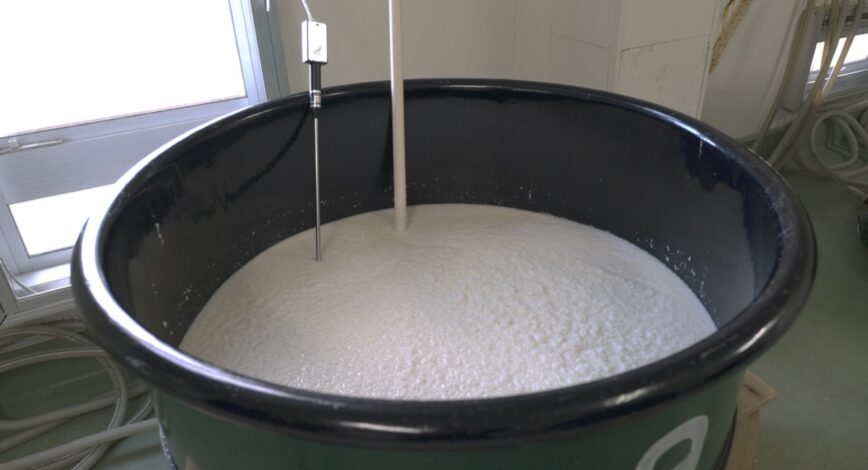 What is Shubo in Sake making?

One of the most important process in Sake making is Shubo making. There are a multiple types of Shubo depending on how it is made, and differences in Shubo result in a variety of tastes and aroma of Sake. Now I will bring some ideas how Shubo works.

What exactly is Shubo?

Shubo, meaning “mother of Sake” in Japanese, performs as the base for Sake making. Steamed rice, Koji, Kobo Yeast, Water and Lactic Acid turns into Shubo. The purpose of making Shubo is to mass-cultivate yeast for alcohol production.

The yeast is delicate and susceptible to bacteria and germs, which can soon kill Shubo. However, it is more resistant against acidity than Bacteria and germs are. Therefore, maintaining its acidity becomes critical to keep an ideal environment for Shubo making.

Lactic acid is used to maintain Shubo acid. There are different types of Shubo according to the methods of obtaining lactic acid. Here, I introduce Sokujo-kei Shubo and Kimoto-kei Shubo.

In Sokujo-kei Shubo making method, by directly adding lactic acid to Shubo, Shubo promptly turns acid. This helps to cultivate Shubo in a stable and efficient manner. The Shubo production time in this method is approximately 2 weeks.

Sake made by Sokujo-kei Shubo tends to have a clearer crispier taste than whati made from Kimoto-kei Shubo.

Kimoto-kei Shubo is produced thanks to lactic acid naturally existing in the brewery container. Lactic acid made by lactic acid bacteria turns Shubo acid in a natural manner.

The production of Kimoto-kei Shubo requires longer time and more intense labour as it handles the natural substances. Therefore its production takes 3 weeks to 1 month.

If bacteria goes into Shubo before lactic acid is fully produced, it negatively affects the quality of Shubo. To prevent bacteria and other notorious microorganism from going into Shubo, controlling the environment of breweries is critical and Shubo needs to be intensively looked after.

Sake made from Kimoto-kei Shubo is likely to have a more profound and sourer taste due to the work of lactic acid bacteria.

What is “Yamaoroshi”? Yamaoroshi is a process of mashing rice that is poured into Shubo. Then, why do we need to mash rice? In the past, it used to take a long time for the rice to be broken down into molecules, “Saccharification”, because they were using non-ideal rice for sake-making, or the milling process was still under-developed. This time lag could allow bacteria to grow in Shubo, so Yamaoroshi was performed to reduce the risks encouraging the saccharification process.

Yamaoroshi was heavy in labour, and it was a demanding job since it was performed all night on cold days.

Yamahai refers to the sake making process where Kimoto-kei Shubo is used but Yamaoroshi process is omitted. Yamaoroshi is abolished (=“Haishi”in Japanese), so it reached its abbreviation Yamahai.

Improvement in technologies around Sake production made it possible to omit the process of Yamaoroshi. Science proved that it is possible to acquire the same quality of Sake without Yamaoroshi process since the better variety of Sake making rice was introduced, the milling technics were improved, and the Koji-kin that for a powerful saccharification was discovered.

Some breweries stick to Kimoto-Zukuri as Yamaoroshi process helps to uniform the composition of the Shubo, and Yamaoroshi positively influences the taste and aroma by shifting the environment inside the Shubo. It is certainly an interesting area of research.

As above, Shubo is one of the most importance processes of production of Sake. The differences in Shubo such as Sokujo-kei, Kimoto, and Yamahai bring a variety of flavours to Sake even if these Sake are produced in the same breweries. Different Shubo brings different aroma, colours, and texture.

Yamaoroshi is a process of (     ) rice poured into Shubo.