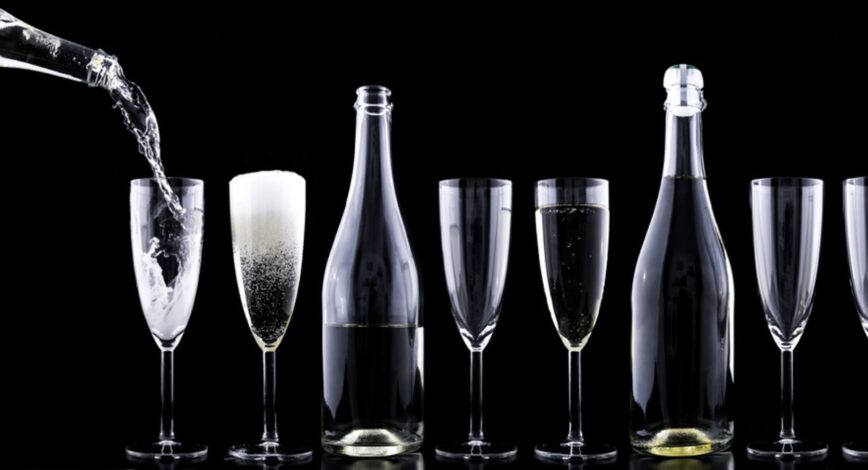 Now try to imagine festive moments where you are ready to toast with a fancy glass in your hand. What drinks do you expect in your glass? Something fizzy? Sparkling wine or champagne might be the frequent companions for celebrative occasions such as parties and anniversaries. Why don’t you try sparkling Sake for a change next time? Fizzy Sake surely adds an accent to the festive atmosphere. Let us explore the world of sparkling Sake now.

What exactly is Sparkling Sake?

What is typical for Sparkling Sake is that they are lower in alcohol and sweeter in taste compared to other kinds of Sake. Thanks to its wide variety and light flavours, sparkling Sake is supported by relatively new, young and female drinkers who are probably not the most powerful enthusiasts of normal Sake. Some sparkling Sake is ideal for daily consumption, others may be kept for more special occasions. Such varieties as Nigori style (not transparent style), and light pink sparkling Sake attract the beginners of Sake drinkers.

Breweries use rough filters for Moromi. By doing so, bacteria remain alive inside the filtered Moroni. In this method, carbohydrate is obtained through the fermentation of rice, water and koji. Since the Sake is only roughly filtered, the content does not look very clear, and it could look even mushy. Most of the sparkling Sake produced in this method has a muddy texture like yogurt. Due to the large existence of active bacteria, when bottled, some products have ventilation holes on the lid to prevent the explosive pressure from inside.

In this method, carbohydrate is added after the completion of Sake production. The level of fizziness can be manually adjusted depending on the amount of carbohydrate added. It usually provides a different texture from the naturally generated fizziness. As the level of carbohydrate can be adjusted, the quality is controlled more easily. Besides, it can also be stored in a room temperature. The cost of production can be kept rather low, therefore the product is available to the mass to drink casually through the domestic networks of convenient stores and hypermarkets.

In a similar manner as Kassei-Nigori style, this method uses natural fermentation technic. As this method is used for Sake whose fermentation is not strong enough to acquire the good level of carbohydrate, one of Moromi, kobo or glucose is added after it is poured into bottles to induce secondary fermentation. This step helps to acquire sparkling Sake of soft texture with a mild level of fizziness. This fermentation process is similar to that of Champagne, so called chaptilization. Thus, sparkling Sake is called Japan-made champagne.

Sparkling Sake in both Kassei-Nigori style and secondary fermentation style could explode and break the bottle when the fermentation lasts too long. The best way to store the bottles is to refrigerate the bottles and keep away from stimulative factors.

Sparkling Sake on the rock is highly recommended on a hot summer day as cold fizzy drinks should provide refreshing moments. Alternatively, sparkling Sake over shaved ice can instantly cool you down. Mixing with soda or sparkling water can lower the percentage of alcohol, and the drink should feel good onto the thirsty throats. Sparkling Sake and Fresh juice like tomato juice and other types of fruit juice also makes a great match. Natural sweetness of rice provides a soft base for the drink by creating harmony of the drink. Fresh fruits should add an accent to it, in a similar way as we add berries or herbs to sparkling wines. Adding squeezed juice of lemon or other citrus fruits gives a refreshing touch to sparkling Sake. If you have a sweet teeth, you could also spread sparkling Sake over scoops of ice cream.

Awa sake Association established in 2016 examines sparkling sake according to their own criteria. It aims to push sparkling sake to become a well-known toasting drink over the world. Be a supporter and toast with sparkling Sake your next celebrative moments!