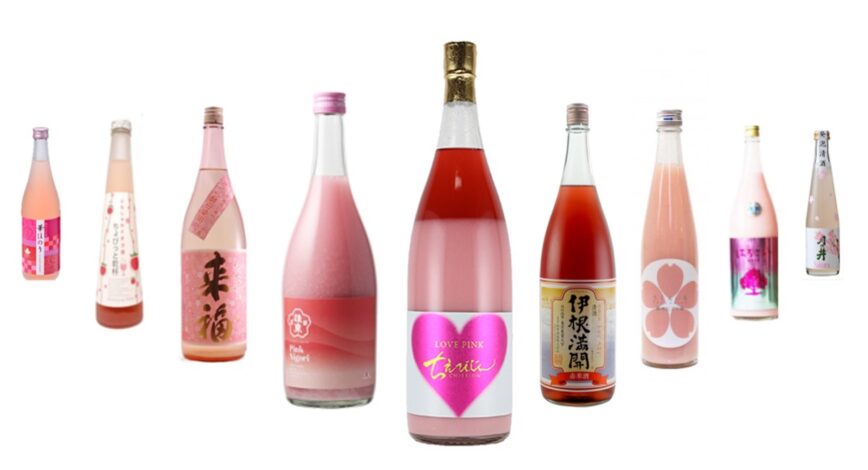 Have you seen Sake in red colour? For the first time you see it, you must be curious how it appears red.

You might have found it on social networking media and thought “there is no such thing like red Sake. It can be fake, or photoshopped”, or you might have wondered if had colouring additives during its production.” Similarly, you might have doubted that rosé pink Sake was a natural product.

Let’s now examine the secrets of red and rosé Sake.

Is Rose(Red) Sake made by adding artificial coloring?

The colour of red can be acquired from certain ingredients and their natural chemical reactions. Hence, it is completely possible to produce red Sake without adding colourings. There are three main methods to acquire the colour. The first method is to use Kodaimai « ancient rice  (古代米) ». The second is to use Akairo kobo « red kobo (赤色酵母) », and the third is to use Aka koji « red koji (赤麹) ».

These ingredients can be added at a different fermentation step from rice, koji and kobo. Each provides different effects in terms of the intensity of colour and flavour, therefore, each brewery has unique recipe to produce their own colours.

Representatives of Kodaimai are Akamai « red rice (赤米) » and Kuromai « black rice (黒米) » which are indigenous rice not going through a process of selective breeding. As an aside, both rice varieties can be found in historical documentations, and vital enough to survive until now. Akamai is an origin of a numerous rice varieties in Japan.

Akamai contains red colour substance, tannin, and the blackish purple colour of Kuromai comes from anthocyanin. Natural substances like Tannin and Anthocyanin are turned red due to the reaction with light. Thus, Sake made from Kodaimai looks red or pink.

Sake made from Kodaimai usually has a descent acidity, sweetness and fruitiness. Some people even say it has a similar impression as sweet red wine. You have multiple ways to enjoy, such as straight, on the rock or dilute with soda, as you please!

Akairo kobo (red colour kobo yeast) derives from the Kyokai kobo No.10, and is stored by the Brewing Society of Japan. The kobo is not exclusive, and can ommonly be distributed to breweries.

This kobo produces red colouring elements through the process of Moromi making. It is mainly used for cloudy Sake which is sweet and low in alcohol.

When you find pink cloudy Sake with a low level of alcohol, it is assumed that the red colour is obtained by red kobo method.

Red koji is often used for the production of supplements and functional food in Japan. In China, red koji is used for shaoxing rice wine. Red koji produces red colouring elements during the koji making, thus it turns the entire koji into red.Sake made with red koji has a light refreshing flavour with a mild acidity and sweetness. This type of Sake is not produced in a large volume, so do not miss a chance if you happen to find it .

The season of Sakura « cherry blossoms (桜)» arrives, the Japanese become more sensitive to pink colours. For your next visit to Japan in spring, why don’t you try rosé Sake for a picnic under the cherry trees. You shall truly appreciate the blessing of the season with rosé Sake!