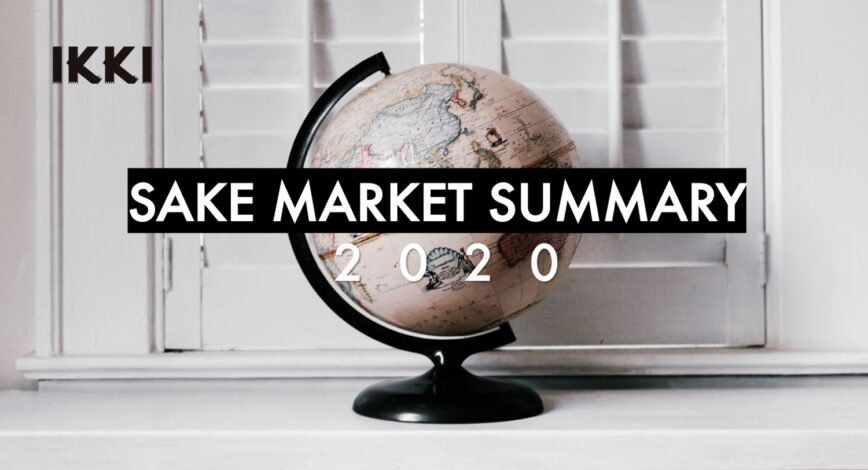 2020 was a challenging year for Japanese Sake in the world market, and also a meaningful year at the same time. As a result, the total trade volume of Sake was declined, but the total trade value increased. In the other words, more premium and luxury Sake was expected by foreign countries. It was surely the outcome of each steps taken by all the Sake organizations, such as breweries, trading companies, restaurants and bars, and other form of services like “Kura Master”.

There were many good tendency seen in the market, and of course the tasks to solve were clearly coming up as well. To share the point of view to all the Sake lovers in the world, shall we look at the summary of Sake Market in the world 2020 from below; 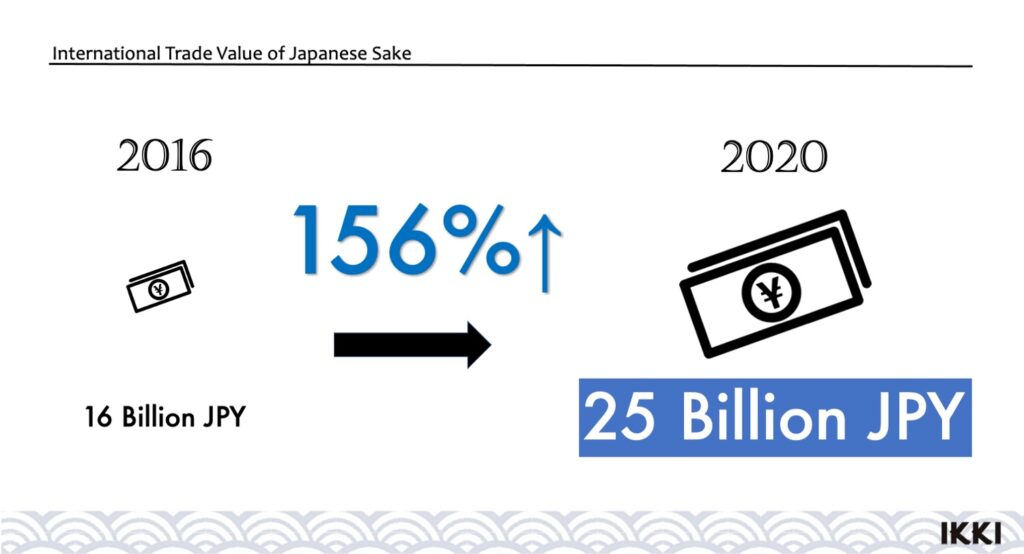 Over the 5 years since 2016, the annual traded value of Sake had been increased for 156% to approximately 25 billion yen in 2020. It clearly proved Japanese Sake is getting accepted by more countries, more regions in the world, and including the result of the decline of exported volume in 2020 people in the world has started to find the value in Japanese Sake in terms of the quality, concept and context.

The bar chart above shows the change in traded value of Japanese Sake last 5 years and the forecast of trade value in next 5 years based on the average growth rate in the last 5 years. In the corona harsh situation, Japanese Sake was like cut off the legs due to the shutdown of world cities. When the areas in the introductory stage, the outlet like restaurants are crucial to let people taste for their first time and look for their favorite Sake brands. Sake beginners cannot find the value without the experience.

So ikki assumes not much increase in the number of Sake lovers. This great result was only from those who have tried and got interested before corona in the most case. So ikki shows the forecast above as a weak vision, because after corona there must be more Sake lovers in the world market. 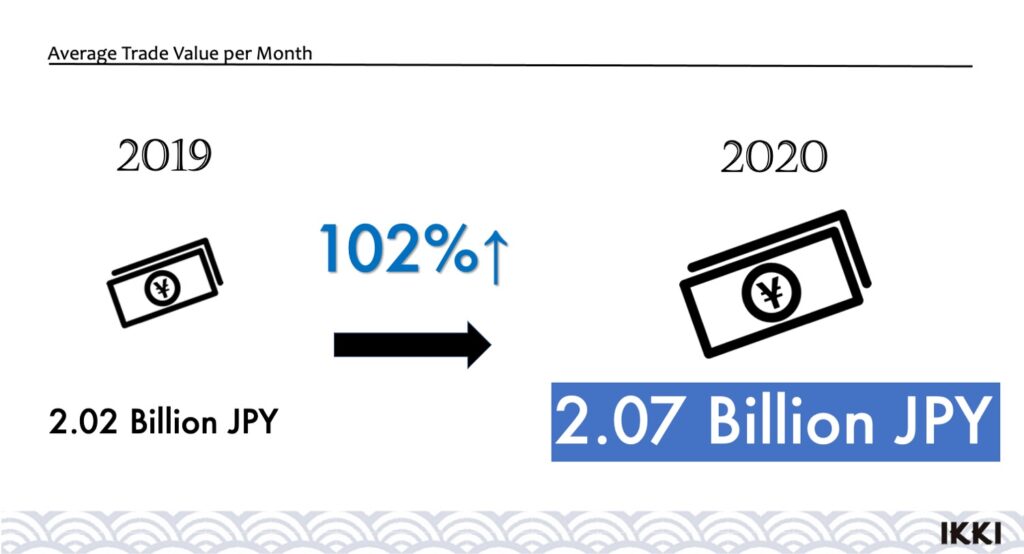 The monthly average trade value of Japanese Sake has increased for 102%, against the corona crisis, to 2.07 billion JPY. It is not a great result when we only looking at the numbers, but when we think about the situation of restaurants at the moment it is a great step. Slowly, but surely Japanese Sake is getting to be one of the unique culture in world food culture to be like wine in the global market in the own direction of Sake.

The line graph above shows the change in monthly Sake trade value in 2019 and 2020. As it is clearly shown Sake trade in 2020 was in the bad mood by the end of summer 2020. Nevertheless lead by the countries with a large number of Sake lovers, such as China and United States, the traded value of Japanese Sake boosted after August and went beyond 2019. In the next chapter, shall we look at which countries import Japanese Sake in what percentages. 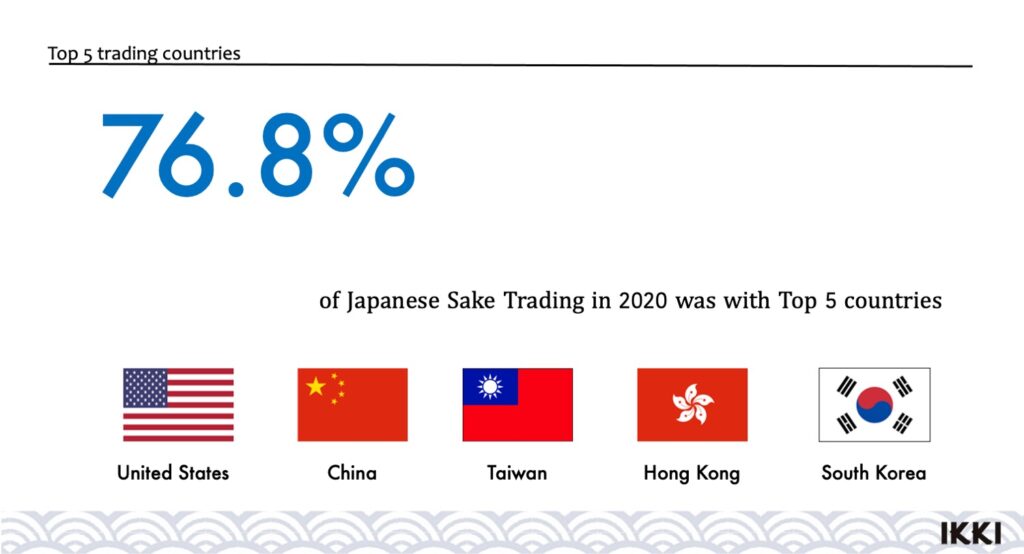 The bar chart above shows Top 20 countries importing Japanese Sake according to their importing volume. It is obvious that top countries occupies the large proportion in the traded volume of Japanese Sake, and showing a long tail as it moves to the right. In the top 20 countries, there are many countries from East&South Asia and Northern America area. It is great to see there are European countries, which increased the volume recently, such as Germany, Holland, France and England. In addition, the countries like Israel is importing more and more number is positive tendency that Sake can be accepted by the World market.

The change in FOB of traded Japanese Sake by world area 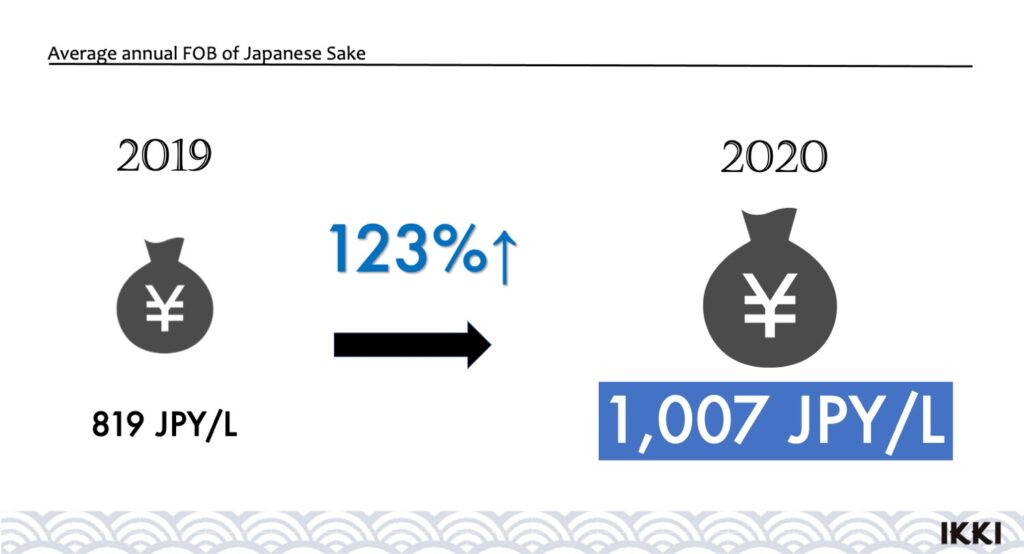 From the FOB price of Japanese Sake, we can see how much people find the value in Sake and what kind of Sake is traded in the world. In 2020, FOB price increased for 123% to 1,oo7 JPY per litre. We cannot clearly say that more people spend money for luxury Sake, because in the countries at early stage they expect Sake in small bottles like 180ml or 300ml, which raise the FOB per litre. In addition, to promote they import Sake in small volume which leads to increase in FOB price per litre numerically. Nevertheless, including the fact that the number is lead by top countries, which import in volume, it is a sign that people find more value in Sake and expect luxury Sake. 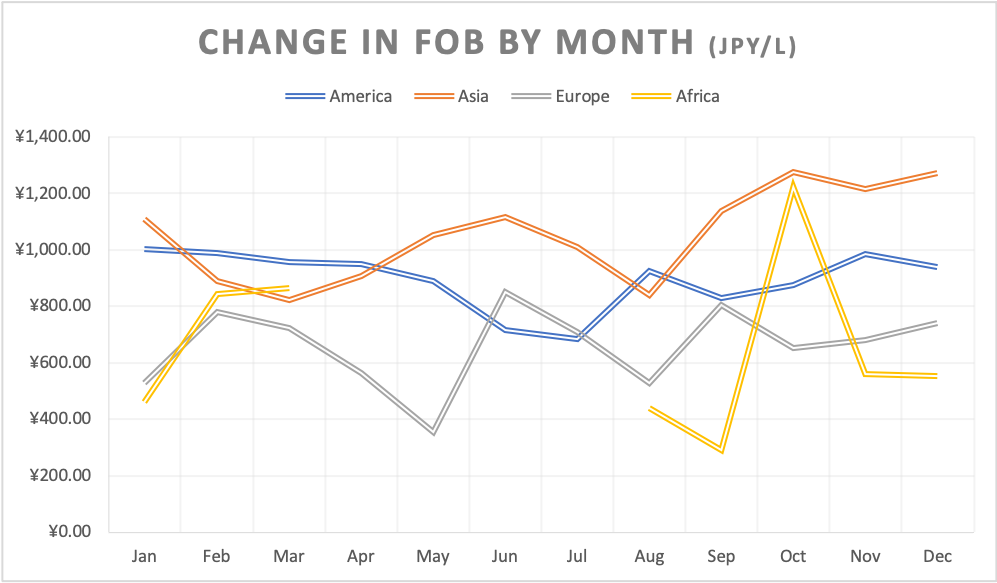 The bar chart above shows the change in monthly average FOB by area in 2020. As you can see FOB price increases as the import volume increases, because the order of countries according to their importing volume  is Asia comes first and America, Europe, Africa as follow. 2020 was an odd year, so it is difficult to find the trend from the graph, but FOB price tends to go up in the winter seasons. Learning from the past, this tendency had been continued for a ling time.

Hope you find the information you expect from the post and feel the world enthusiasm of Japanese Sake.