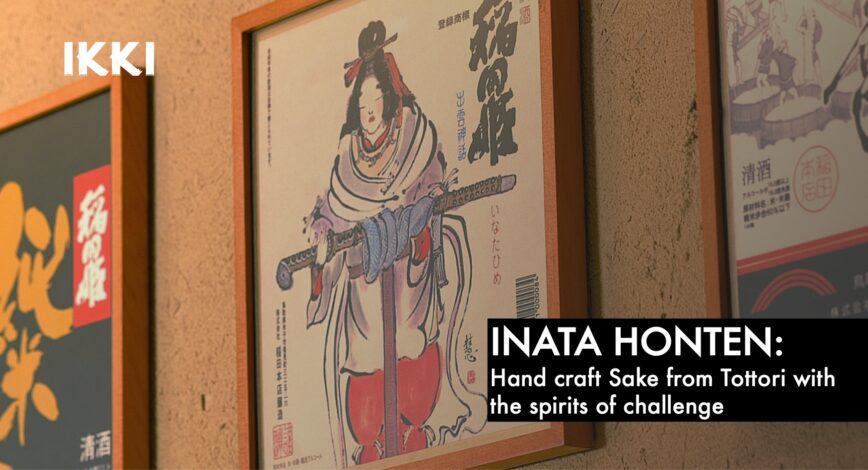 Inata Honten 稲田本店 : Hand crafted Sake from Tottori with the spirit of challenge

In Japan, the island of 8 million gods, there is a local mythology “Japanese Mythology” left in the book written in 1,300 years ago. The story is about the anecdotes of Japanese gods in local areas, and one of the short stories from Japanese mythology is particularly famous even today: Izumo Mythology.  Izumo Mythology is the story from today’s Shimane and Tottori, so called Sanin area.

The outline is God Susanoo defeat the dragon like monster with Yashiori no Sake, which are one of the origin of Japanese Sake, and there is a beautiful female god in Izumo Mythology called Inatahime.

Inatahime is the name of the god which is the wife of God Susanoo, but Inatahime is the brand of Japanese Sake brewed in Tottori, where the location of Izumo Mythology is.

Inata Honten is Sake brewery established in 350 years ago. It is the brewery has never stopped challenging according to their history like their first challenge brewing beer in 1982.  In 1931, Inata Honten was the first company to sell Sake to drink cold “Hiyazake” when people are drinking Sake at either at the room temperature or Kansake. The last president, the father of the present president Ms. Iku Naruse, also challenged to open a restaurant in Tokyo in order to communicate with customers directly.

Present president Ms. Iku Naruse took over the brewery as she was the only child of the last president. When she started her career in the brewery she did not have much passion in Japanese Sake industry due to her low alcohol tolerance, however, as she works with Kurabito(people working in a brewery) their attitude towards Sake brewing inspires her.

“When I took over I did not drink much, so I did not like Sake. So I start from getting to like Sake.”(Iku Naruse)

Learning from the history of challenges in the brewery history, Ms. Naruse launched a product development project to get to like Sake by herself. For people who has a low alcohol tolerance, she developed one product called “Nashi no Osake (pear liqueur)”. Pear in Tottori is famous for the specialty of the district in Japan.

It is a relatively sweet alcohol their current customers do not prefer, but she produce the product which she can like to tell the customers her passion and story behind naturally when she face them. With Nashi no Osake, she was getting to like the brewery and products step by step. As a next step, she challenges to produce Sake which she can like and new Japanese Sake product “Iku’s” was born.

Iku’s : Sake for non-fan of Sake

For those who are not good with alcohol, Japanese Sake is not an easy choice in the dining scene. Ms. Naruse herself is also in the same situation, so she produced Sake for non-fan of Sake “Iku’s” (https://www.inata.co.jp/ikus/) based on her own experience.

The concept of Iku’s is to be enjoyed by men, women, Sake fan and non-fan of Sake. Iku’s is the sake free, new, interesting and not difficult. Inata Honten strive for the balance of sweetness and acidity in Iku’s. In the normal brewing process of making Sake sweet; to get more sugar in Sake, it lose sharp acidity in Sake. Inata Honten brew Iku’s with “Sojun Ichidan Shikomi” method, so that sweetness and acidity balanced at low alcoholic percentage, which is 9%.

The spirit of challenge in Inata Honte has been passed down over the decades, and they are challenging for the future now.

Sake brewing of Inata Honten has no been changed over the long period of time to keep their traditional brewing method.

“I fully trust employees in my brewery. One day, I proposed to install machineries for the efficiency, but Toji denied. So, even now we are brewing Sake by our hands.”(Iku Naruse)

Ms. Naruse express herself “Mother of the brewery”. Employees work in each individual task and Ms. Naruse trust them. Her job in the brewery is to take care employees like her children and live with them peacefully.

It is same for Sake brewing. She trust Toji and Kurabito, and they craft Sake by touching rice to check the quality physically with their five sense. Of course, some parts of Sake brewing are by machineries, she manages the brewery to let Toji brew Sake by their own hands.

Mr. Tsukutani is entrusted World Sales of Sake of Inata Honten by his brewery mother. He actually use his legs to travel around to tell the quality and story of Inata Honten Sake to people in the world face to face.

“There are local alcohol in each local area of the world. I want people to know their own local Sake first, and then enjoy our Sake and feel the story of Japan, Tottori and Inata Honten.”(Shinji Tsukutani)

“Japanese Sake is seen in Japanese traditional ceremony. I hope people enjoy Sake, but also get an interest in Japanese culture.”(Iku Naruse)

The brewery the great mother looks after Kurabito to brew Sake: Inata Honten. Their effort in Sake brewing weave their original story to produce unique Sake. From Tottori to Tokyo and beyond the country borders, Inata Honten directly communicate to people in the world to enrich people’s mind.