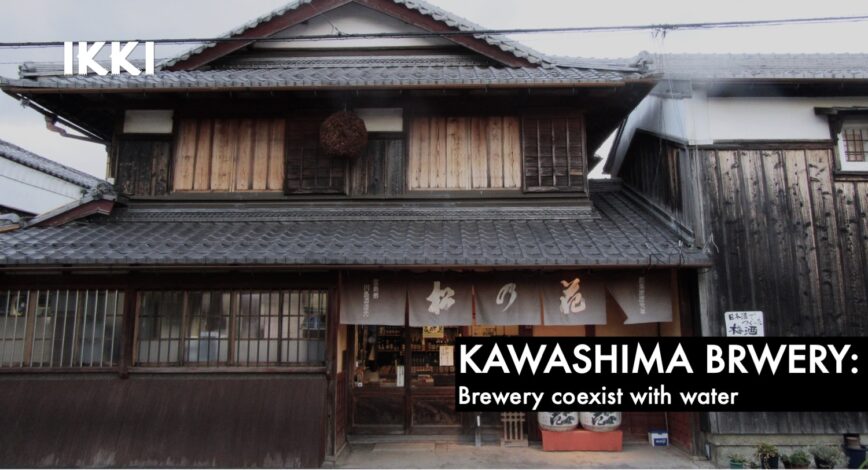 Do you know the important role of Shiga prefecture in Kinki region?

Shiga prefecture holds the largest lake in Japan “Biwako”, and supplies water to more than 1.5 million people living in Osaka, Kyoto, Hyogo and Shiga from the lake.

In Shiga prefecture, you can find various festivals and religious events regarding water. There is Torii gate of Shirahige shrine built on Biwako lake, and it represent how important water is for Shiga people.

On West of Biwako, there is a small town called “Takashima”. Takashima is a place especially blessed with water. It is only 20 minutes away from Kyoto station, where Shinkansen stops, but the landscape is completely different. The houses are made of wood in traditional Japanese style and surrounded by rice fields. In such place, there is one brewery “Kawashima brewery”. Chairman of the brewery Tatsuro Kawashima has been brewing Sake in Takashima where he was born.

The name of Matsu no Hana is coming from the pine tree planted on the land before the brewery built. Matsu means pine tree. In order to build the brewery, they had to cut off the pine tree on the land, but Kuramoto felt sorry about it. So, he decided to cut off the tree, but took the name from the tree and named the flower of pine “Matsu no Hana” to his Sake. From this story we can feel the gracefulness towards the nature.

Chairman Mr. Kawashima never forget the respect to water. In some areas, the ground water had already been dried up, but not in Takashima. The land of Takashima supplies the crystal clear water called “Harie no Shozu” to people in Takashima, to Kawashima brewery and to people who enjoy Matsu no Hana over the decades.

Mr. Kawashima is currently 71 years old. He has overcome hardships with his Sake Matsu no Hana, and today the environment advanced beyond the imagination of young boy Kawashima. Not only the environment, the mindset of people also changed over the years.

“Since I became Kuramoto in 2000, I started to feel awkward in the society. I thought some people felt the same.” (Mr. Kawashima)

Mr. Kawashima had been living with beautiful nature of Takashima, so he felt losing something very important in the convenient world with the advancement of technology. It was happening in Sake industry at the same time.

Loss of heart with technology

Isshobin(1800ml bottle) had been commonly seen on the table of Japanese house dining by 30 years ago. In the traditional Japanese houses, there was a back door at the kitchen called “Katteguchi”. A deliveryman of liquor shop used the door to deliver Sake and other fermented seasonings like soy sauce without any appointment. Drop in, get the requests, deliver Sake every day. When housewives and the deliveryman talked at the back door, there was a rapport in Sales of Sake.

Japanese Sake was a communication tool not only in a consumption, but also in a delivery. However, not so many people think about Sake like before. We gained the convenience with the development of technology. We can get what we want efficiently and conveniently. In new commercial process, the face-to-face communication is not needed. Japanese Sake is now a luxury product and not a communication tool anymore. The development in line with the market mechanism took something important away from us.

Great East Japan Earthquake destroyed everything, and nothing left. Japanese people cannot forget the shocking movie of Tsunami engulfing cars on the seacoast highway. Once the great earthquake happens, wealth or fame does not have any meanings there. When people faced the cruel reality, people’s worries spread all over Japan. “People have started to look for something really important for yourself since 3.11”, Mr. Kawashima eagerly says.

In 1995, Mr. Kawashima ran to Kobe. It was to bring relief goods from Shiga for sufferers of Great Hanshin Earthquake. There was great damages to most of breweries in Nada Gogou as well.

“When I ran for the relief, it was under full of tragic atmosphere. Against my expectation, there were smiles of sufferers in Kobe.” (Mr. Kawashima)

When people lose assets, fame and everything, there are no difference in rich men and poor men. 25 years ago, people were connected heart to heart. People in Kobe stood up together regardless of who they were before, and revived the beautiful city of Kobe. How about people today? Do we have such connection in today’s convenient world of technology? There must be a role in Japanese Sake today.

Now, corona virus is throwing a question to us. The society are separated by the virus, and the connection between people are getting weak. Under this situation, a question is thrown to Sake as well. What Sake can do now?

“There is a sustainable ecosystem in Japanese countryside from the past, and even now” (Mr. Kawashima)

In Takashima, where Kawashima brewery located, there is a sustainable life style called 「Kabata」. People draw water from underground to their home and pool water for daily use in-house. Pollution of the nature affects the quality of water at home directly, so in Takashima people care about the nature around like their neighbors. There is no clear border of human and nature: people in Takashima coexist with the nature.

The land gives the blessing of nature, water to people. They protect the nature. With the protection, water are not dried up and given to people again.

Takashima is one of the role models of Sustainable Development Goals by United Nations. Takashima have maintained this small sustainable community from before the world raise their voice for the sustainable society.

“Many people from different places visit our breweries everyday. I think they visit us to talk. They purchase Sake in addition.” (Mr. Kawashima)

Mr. Kawashima think there is an answer of what people are looking for in breweries. In Takashima, where people coexist with the nature, there is a something we lose instead of the convenience. Kawashima brewery has been and will connect people and people in today’s society through Japanese Sake.

The role of Jizake brewery may be to tell the history and story and promote the local area. However, Mr. Kawashima brew Matsu no Hana in Takashima with a wish for the society with heartful connection.

Please visit Kawashima brewery and Takashima. There might be what you are looking for.

In addition to the article there is a session talk on our YouTube channel: