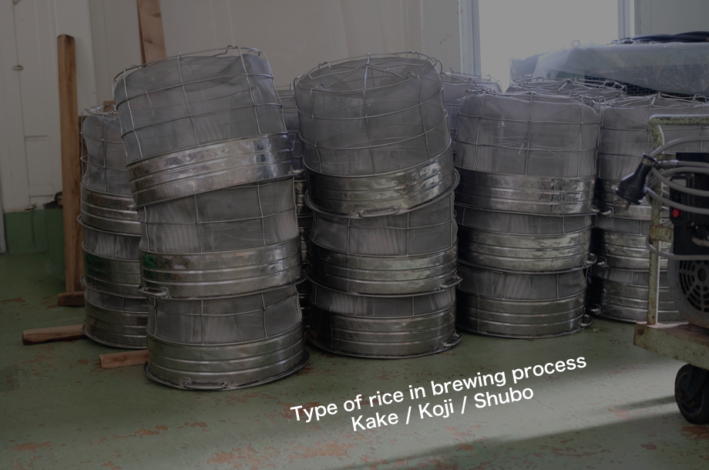 As you know, Sake is the alcohol made of rice. In order to produce 1800ml Junmai Sake, theoretically need 1.3kg of brown rice needed but not only 1 kind of rice. As you can find from the label, there are kinds of rice used to brew Japanese Sake such as Kake mai, Koji mai and Shubo mai. On this page ikki deliver the information about the kinds of rice used in the brewing process and their difference.

Koji rice is the rice used to produce rice koji. In the room of koji “Koji-muro”(麹室), toji spend 3 days and nights to produce the best quality koji. As koji is a living, the temperature and humidity control are very severe. Toji keeps measuring the temperature of rice koji to see how much the koji rice fermented.

Out of all the rice used in the Sake brewing process, about 20 % is Koji rice. It works as a trigger  of the whole fermentation process of Japanese Sake brewing, so it is quite important to select the quality of rice.

Kake rice is in the process of producing Moromi 醪. It is 70% of all the rice used in the brewing process. In the process of Moromi Shikomi, there are stages of adding rice to control the fermentation to realize the aiming taste quality. Today, most of the Shikomi process are 3 stages “Sandan Jikomi”(三段仕込み). For the other products such as Mirin, Amazake or special sec products, it might be 4 stages or even 10 stages but mostly 3 stages. This 3 stages called Hatsu-zoe, Naka-zoe, Tome-soe and details are as below;

In the tank, firstly add Shubo. On top of Shubo add Koji rice, steamed kake rice and water to start Shikomi. The volume is almost double the volume of Shubo. Shubo initiate the fermentation.

Odori is basically leaving the tank. It is to increase the number of Kobo (yeast) for Naka-zoe and Tome-soe as it will be more rice in the tank.

Add the double amount of rice as Naka-zoe. After this process, we can get Moromi and move the moromi to the tank to rest and ferment more.

In this page, ikki deliver the role of rice and its type.

Please feel the Umami of rice from Japanese Sake.